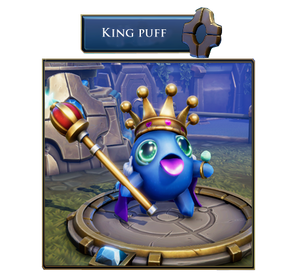 King Puff is one of the Masters in Minion Masters. This master is unlocked with 1500 Shards or 775 Rubies.

Puffs are small legendary creatures that bring happiness and amazingness to all who meet them! They live in between the fabric of reality and can puff in and out of existence as they see fit.

Nobody knows why this one is dressed as a king, or why his favorite weapon is throwing old pans and pieces of cheese at the opponent, but his magic is definitely powerful.

King Puff is a trickster, he loves to confuse his opponents and keep bridge control just as he loves kingdom control.

The King's Birthday: Celebrate the king's birthday every 43 seconds. Reduce this cooldown by half the cost of any 4-7 mana card you play.