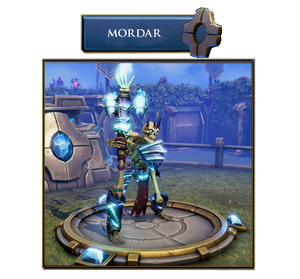 Mordar is one of the Masters in Minion Masters. This master is unlocked with 1500 Shards or 775 Rubies.

No one knows Mordar's origins (including Mordar, who forgot long ago) but he is old and quite insane. One thing is certain, he's a lich of immense power who defies death on a regular basis.

Mordar uses his tombstones to raise the dead and his staff to slowly kill all attacking minions.

Another Tombstone (Unlocks at 120 XP)

Mordar's attack is an AOE that hits all enemies on his side of the arena.

Mordar's minions have a small visual effect when a tombstone is ready to ressurect. This is done in order to highlight which of the minions belong to mordar, important in 2v2.

Mordar's tombstones resurrect units with health missing. They fully charge after 20 seconds, and the health missing is proportional to how much charge they have. For example, after 10 seconds (half charge), if a minion is resurrected, it will have half of its health. No units are resurrected if the tombstone has under 10 seconds of charge.