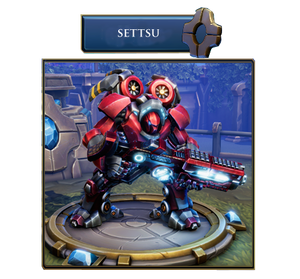 Settsu is one of the Masters in Minion Masters. This master is unlocked with 1000 Shards or 525 Rubies.

Settsu used to be a soldier. She's been deployed in many campaigns during her years and been through countless battles. Eventually she got tired of all the rules *******t and went "on her own ****ing plan". How exactly she acquired the mech suit is unknown, but it's cutting edge prototype technology. She joined the games because she likes a good scrap, and the prize at the end will let her finally fulfill her personal objective..

Settsu is a bad-ass ex-soldier that never plays by the rules. She can enter the Arena herself to annihilate enemies with superior firepower.