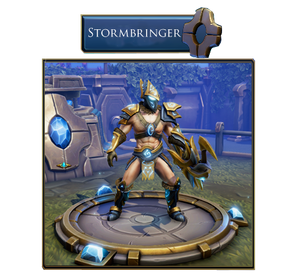 Stormbringer is one of the Masters in Minion Masters. This master is unlocked by default.

Stormbringer hails from the same place as Volco, and is also suffused with the power of the weapon he wields - the deadly Stormbow.

One of the few heroes to embrace the nature of the game shows, he spends most of his time taking selfies and writing fan mail to himself...

Stormbringer excels at everything that has to do with range!