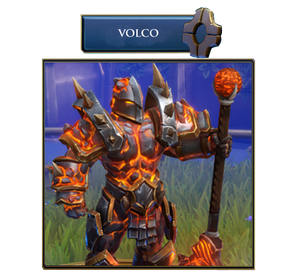 Volco is one of the Masters in Minion Masters. This master is unlocked with 1000 Shards or 525 Rubies.

Volco is a former slave who wields the legendary Volcanic Hammer. It helped him break his chains, but the rage bubbling within the weapon has consumed him entirely and they have become almost as one.

Volco is not scared of swarms, but he hates flying enemies he can't reach.

Burn The Bridge (Unlocks at 20 XP)